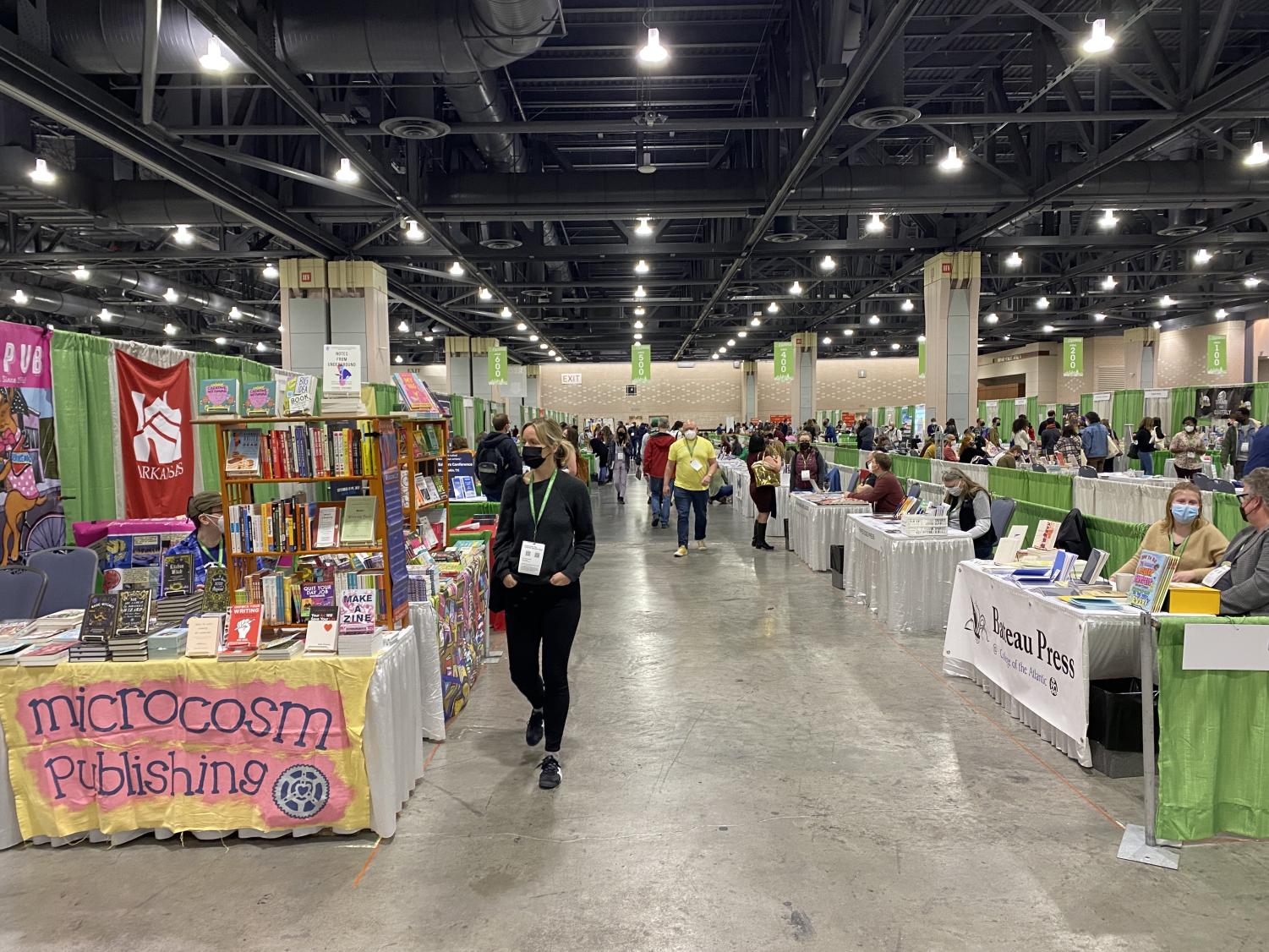 After a year’s hiatus, the AWP Conference and Book fair is back live in Philadelphia

After a year’s hiatus, the AWP Conference and Book fair is back live in Philadelphia

(PHILADELPHIA) Two years ago in San Antonio, Rose Andersen made her normal visit to the Association of Writers and Writing Programs Conference and Bookfair.

She didn’t realize it would be her last social event for quite a while.

“I think I got COVID on the plane ride back,” joked Andersen, the assistant director of admission at Cal Arts.

But just as the world is slowly returning to normal after two years of lockdown and quarantines, the annual AWP Conference is back in person this year.

And all throughout the Pennsylvania Convention Center, writers, publishers, and literary fans were greeting old friends after a one-year hiatus where the conference was virtual-only.

“Writing is a solitary business, right?” she asked. “You only do it yourself in a room in front of a screen or a paper. And yet there’s this whole community outside of that room. So it’s always been nice once a year to get together with them.”

The AWP Conference and Bookfair is the largest literary conference in the nation. Each year, it attracts thousands of attendees to locations across the country. The conference features hundreds of exhibitors, as well as book signings, author readings, panel discussions, and other special events.

The last in-person conference was in 2020. Last year, AWP was virtual-only.

Lincoln Park’s BatCat Press, the only high school student-run small press in the country, was making its twelfth appearance at AWP.

This year’s Bookfair is the first for many guests, like Natanya Biskat and Desmond Fuller of The Idaho Review.

“We’re super excited,” Biskat said. “This is so cool, especially after a long pandemic. It’s nice to be with people.”

Brian L. Jacobs of Tofu Ink Arts Press traveled from Los Angeles to attend his first AWP. This is Tofu Ink’s first year as a press, but Jacobs was curious to attend for another reason.

“I’m excited because a lot of these people have rejected my own poetry, and some have accepted it,” he said, “and I’m just curious to see these people.”

Some first-time guests, like Moyo Abiona, media assistant for Poetry Foundation, were looking to fill up their complimentary tote bags.

“I’m personally excited for some swag!” Abiona said with a laugh.

This year’s AWP also marks some other firsts for guests. Elliott Holt has visited AWP several times in the past, but was making her debut as the deputy editor of The Kenyon Review.

“This is the first time we’ve been at AWP since she took over,” Holt said. “She’s the first woman of color and the first editor of color, period. She also is just an amazing poet and this is just an exciting time to meet The Kenyon Review.

“There is kind of a new era beginning here,” added Holt, “and we want people to understand that exciting things are happening.”

Many of this year’s exhibitors took part in 2021’s virtual AWP. However, Natalie Wollenzien of Sarabande Books was grateful for the return of in-person relationships.

“So much of the interest at AWP has been about making connections with people,” she said.  “It’s really hard to do that when you’re just sitting in a virtual room, waiting for people to trickle in. It’s much more organic for people to just come up and ask you questions and look you in the eye. You’re sectioning off this entire weekend to see your book friends.”

Other attendees, like Erin Slaughter and Lena Ziegler of The Hunger, were also glad to reconnect with “book friends.”

The two said they were grateful to see “people we care about and haven’t seen in a long time and also meeting some of the people that we’ve published over the years,” they said. “Meeting people we’ve been published by. Meeting people in a personal way.”

Mike Good, the managing editor of Autumn House Press, added, “We don’t get to meet our authors, and it’s a really nice chance to meet a lot of our authors for the very first time.”

Many exhibitors were just as anxious to be spectators as well. Hadley Griggs of Salt Hill Journal said, “I have a list of all the panels that I want to go to. I also have some friends that I’ve followed for a really long time on Twitter and I’m really excited to meet those people in person for the first time.”

Even though some attendees are finally meeting each other face-to-face, they’re already part of a welcoming literary community.

“Oftentimes our families don’t understand what we do as literary journals,” said Meghan Maloney-Vinz. “So it’s nice to get to be around your community, of your people. It’s not an existential crisis anymore.”

Ava Lockette, DIRECTOR OF SOCIAL MEDIA
Ava Lockette is The Director of Social Media and Merchandise on The SIREN. A senior Writing and Publishing Major hailing from Mars PA, Ava has been writing for the newspaper for three years. She’s a co-writer for the pop culture column What’s Poppin’ along with Karsen Thompson and enjoys writing relevant articles concerning current events and pop culture.