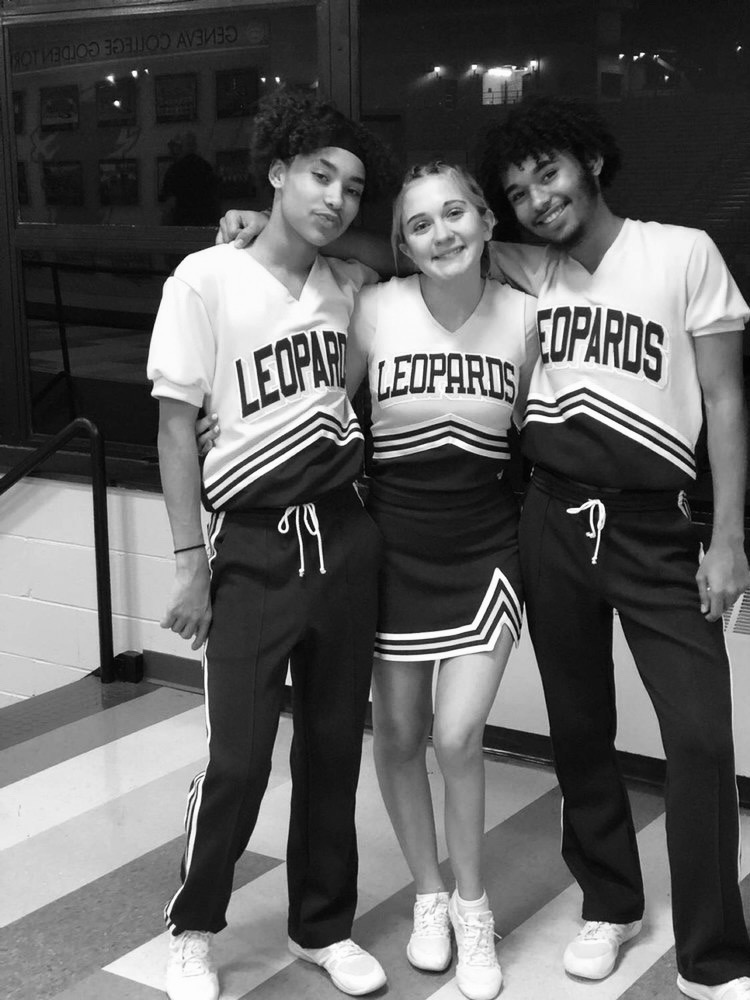 FEATURE: reporter Abigail Gallen talks to and about the first male cheerleaders at Lincoln Park

Historically, cheer is a sport primarily for women.

Some even argue that it’s not even a sport. Both of those statements have to do with the patriarchy, but that’s an issue to discuss further at another time.

High school students across the nation put in several hours each week to practice and strengthen their performance, very similar to how football players and basketball players get ready for their games. Cheer involves immense strength, a powerful memory, and endless stamina to keep the school spirit running for hours at a time and execute each move or trick as perfectly as possible. When you look at cheerleading teams across the nation, the majority is female, and up until last year, Lincoln Park Performing Arts Charter School never had any male presence on their cheer team. And then Quay and Quan decided to try out.

Juniors and twins Quay and Quan Singleton were kind enough to share their insight on not only what it’s like to be a male cheerleader, but what it means to be the first at Lincoln Park.

“I played football for seven years at my old school,” said Quay, a Junior Health Sciences major and Varsity Cheerleader. “I wanted to try something entirely new.”

Quay’s twin brother, Quan Singleton, a Junior Dance major, repeats a similar sentiment; “Ever since I was younger, I always was interested in tumbling and being part of a cheer team. And it’s amazing…[A lot] of boys would rather play play football than cheer, except me.”

In fact, it was originally only Quan who planned to try out.

“…Quan was originally supposed to be by himself. He definitely was born to be a cheerleader. I decided to join him when I realized that I could be just as successful as him,” said Quay.

Is there, perhaps, some brotherly competition? It doesn’t seem like it – though, both brothers recognize their individual worth on the cheer team.

“If my brother didn’t want to cheer, I believe I still would, because I love it. And I’m good at it.” Said Quan.

While Quay and Quan supported each other endlessly, it’s the support from the players, peers, and team itself that would prove most significant.

When asked whether or not the cheer coaches and members accepted the two, the answer was a resounding yes.

“We don’t really pay any kind of mind to the hate. Especially when we have a 40 point lead.””

According to Quay, “The team made such a comfortable environment for my twin and I. What actually was heartwarming was how much support we got from all the other [Lincoln Park Sports] coaches. They made sure that we were safe and had nothing to worry about.”

Because Quay and Quan were the first male cheerleaders of Lincoln Park, their physical and emotional safety was initially a concern.

Quay recalled how he felt before the season started. “Not gonna lie, I was more nervous about the games and how the other schools would react.”

Unfortunately, Quay’s nervous prediction proved to be correct: “There was a particular time when another school’s student section was calling us slurs…but Dr. Rodgers went out of her way to speak to [the other] principal about the matter.”

Quan agreed, and noted similar experiences. But both of them are highly resilient, and truly believe in their talent and worth on the team.

When it comes to backlash, Quay said, “We don’t really pay any kind of mind to the hate. Especially when we have a 40 point lead.”

And as for Quan? He couldn’t have stated it better.

“I do things for me, and only me. Everyone else’s opinion doesn’t define who I am as a person. Nothing will stop [us] from being cheerleaders – because we’re good at it.”