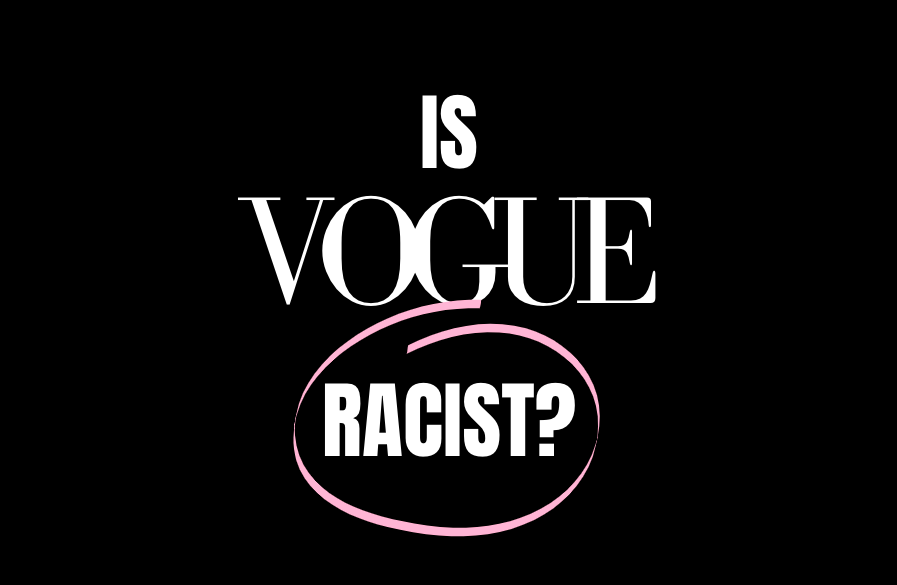 The twenty-first century has been a rude awakening for racists. Sexists. Homophobes. It’s also been an empowering one, for both “sides of the spectrum;” the United States saw both the first Black man as President as well as the hundreth white supremacist as president. It is an era of wokeness, of criticism, an era of change.

To the general public, the presence of fashion magazines specifically might seem like a non-factor, but their influence is more infiltrating than most think. With social media platforms ranging from Instagram to TikTok, along with their online platforms, fashion magazines show us everything. Who was worth being on the cover this month? Which designer has the most sought after collection? Who wore it best on the most recent red carpet event?

When it comes to Black talent, fashion publications historically and continuously underrepresent photographers, editors, and other artists that work behind the scenes to make a magazine beautiful.”

Between the lines of Instagram captions and published within the material, sitting in the ad campaigns and covers, behind the scenes, there is an almost undetectable, photoshopped trace of oppression.

The first Black woman to ever be featured on a Vogue cover was Donyale Luna in 1966 for British Vogue. It was another eight years before American Vogue shot Beverly Johnson for the August 1974 cover. In a self-written essay she wrote for the Washington Post, Johnson explained how despite her breakout modeling gig thanks to the publication, she was grossly underpaid compared to the white cover models. According to Johnson, the editor-in-chief Ruth Whitney told her she had “broken all color barriers,” and then the magazine proceeded to ignore and admonish Johnson’s desire to include other talented Black people in the process of shooting the cover. It is apparent that, due to high demand, Beverly Johnson was used to give American Vogue a progressive reputation.

When it comes to Black talent, fashion publications historically and continuously underrepresent photographers, editors, and other artists that work behind the scenes to make a magazine beautiful. Countless reports of underpaying and subtle racism within the structure of these publications have come to light especially during this time, where a wave of activism has taken over the entire world. While Vogue is in the spotlight, the reports include Meredith, Refinery29, and Paper to name only a few.

Incredibly, the first ever Black photographer to shoot an American Vogue cover was in 2018. It took over a century for this to happen, and at least four generations since the beginning of the 21st century saw the covers of Vogue without seeing a cover that a person of color can be credited for.

Many speculate that a change in leadership within American Vogue is far overdue. Anna Wintour has been editor-in-chief for over thirty years, and many would like to see how the magazine would look with a new editor – one without “performative allyship” that doesn’t fulfill itself.

Women aren’t necessarily safe within this realm, either. The most obvious item to point to is the lack of size diversity and the abundance of photoshop that infiltrates every page, and for a long time fashion magazines were a primary contributor to the objectification and sexualization of women. But again, it’s the behind-the-scenes that’s ultimately concerning.

It’s frankly glaringly obvious that the higher up in the industry you look, the more men there seems to be. This is not only true for fashion publications, but for the fashion industry as a whole. Business of Fashion pointed out that entry-level jobs for fashion are filled to the brim with women, meaning there’s not really a lack of women. Women just aren’t chosen to be the top executives and leaders of an industry that was built by women, made primarily for women. Which is, unfortunately, an issue for another article.

Erin Cunningham of Refinery29 said, “In 2017, just 13.7 percent of magazine covers from the top 10 American fashion publications were photographed by women.” The specific issue concerning female photographers in the industry has gained a lot of attention recently, prompting Cunningham’s article “30 Female Photographers Sound Off On Fashion’s Gender Imbalance.” And on the other side of things, the notorious Instagram account “DietPrada” exposed several male photographers who sexually assaulted the female models they were shooting, back in 2019.

The deeper one digs, more is to be found within the realm of fashion publications. Prejudice against LGBTQIA employees, pay gaps, an extreme lack of diversity…all of this is to be noted and remembered when a fashion magazine releases another advocacy editorial. Fashion is, sometimes, not as beautiful as what you see.