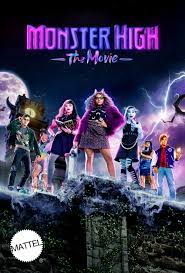 This one was kinda good though. I’m not going to lie; I like it.

Let me explain to you my obsession with a movie like the new Monster High movie, ok? Just sit tight.

I did not grow up with Nickelodeon or Disney, so in an attempt to force nostalgia on myself, I started watching stuff like iCarly, Hannah Montana, Victorious, and Descendants. Thus began my obsession with bad children’s movies. It’s just stupid fun. I watch Zombies for the enjoyment of tearing into pieces like a good movie reviewer. I love Zombies so much that I have two (count ’em, two) DVDs of the movie. Is Zombies a good movie? Absolutely not. Would I die defending its grave? Absolutely.

Same with the Monster High movie. It’s got the same format and stupid fun as Descendants, but it has it’s issues as die-hard Monster High fans have told me.

But who gives a Hyde about their opinion? You’re here for mine. I’ve never seen any Monster High cartoons. I’ve never owned any of the dolls. All I knew going into this movie was A) they’re monster kids and B) there’s a mummy girl named Cleo. Nothing else. So, this was a pretty good introduction to the whole universe of Monster High.

Again, I found it funny. I find so many things funny, unfortunately. Some of my laughter was just me making quip remarks to myself while watching the movie, but most of it was just Frankie. Literally the best character, and I would die for them.

Also, yeah, the they/them aspect! It is so important to teach children about different pronouns and how to interact with people who may not look like the pronouns they prefer or if they have pronouns that may seem strange at first. Frankie, out of every character, is the perfect one. They are made out of different people of different genders, so it makes so much sense that they would have they/them pronouns.

I just love Frankie; it takes the movie from a 3/10 to a 9/10. It’s currently streaming on Paramount+, so if you happen to have access to it, go ahead, give it a go and have fun ripping it to shreds.