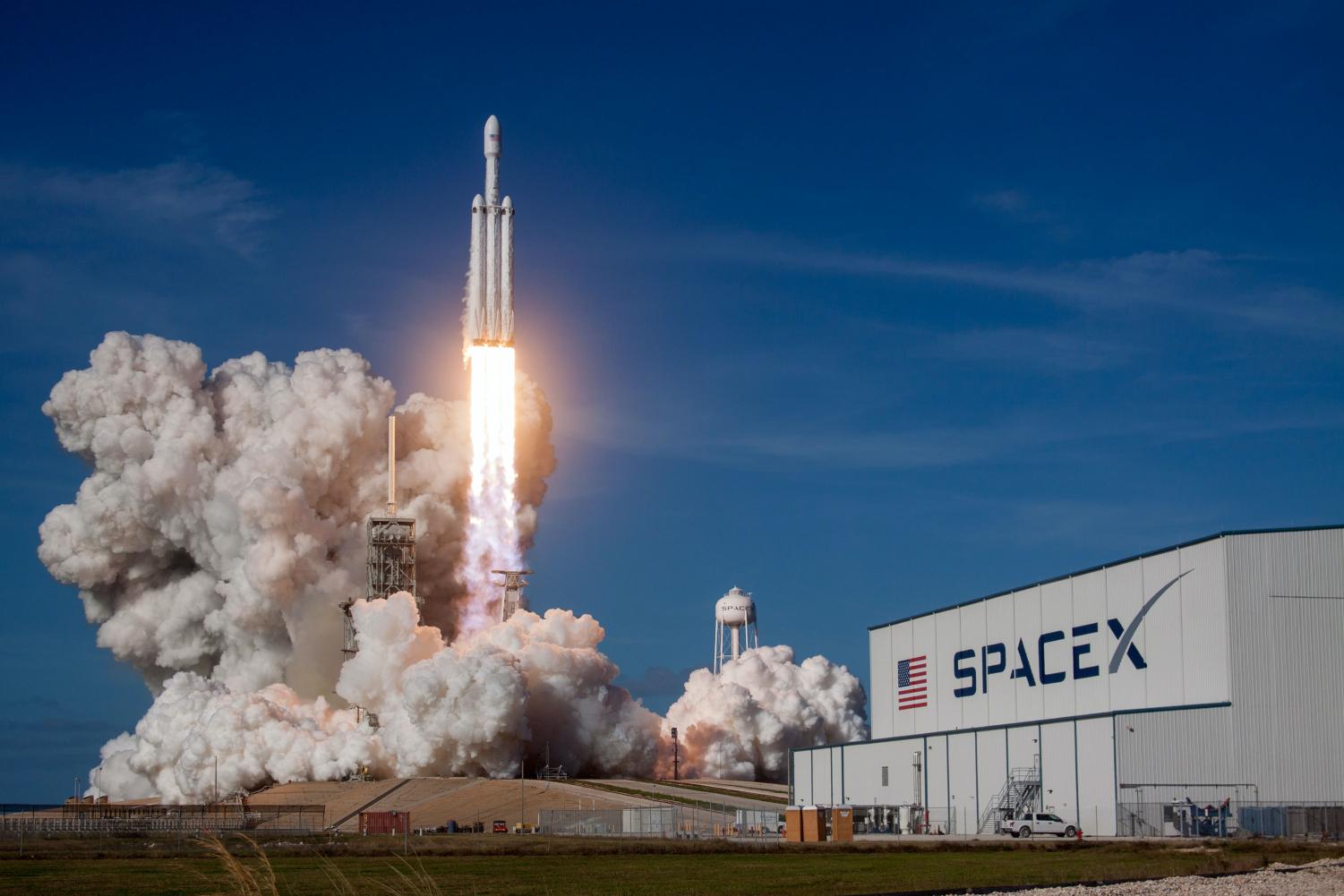 One of SpaceX’s rockets, Falcon Heavy, takes off for a demo mission in front of a building labeled “SpaceX.” (SpaceX)

One of SpaceX’s rockets, Falcon Heavy, takes off for a demo mission in front of a building labeled “SpaceX.”

SPACEX OPINION: THE GOOD, THE BAD, AND THE ELON

SpaceX is an organization founded in 2002 by technology kingpin Elon Musk focused on, well, space. Specifically, SpaceX specializes in the design, manufacturing, and launch of advanced rockets according to the official website. In fact, if you’re curious, SpaceX’s launches are actually live streamed on their YouTube for everyone to see.

One of SpaceX’s well known rockets is the Falcon 9. The SpaceX website crowns it the “first orbital rocket capable of reflight,” meaning it can be relaunched. SpaceX states the Falcon 9’s purpose as transporting people and things in and out of Earth’s orbit and beyond.

One of the most notable benefits of a reusable rocket is how cost effective it is. Most of the “important” parts of the rocket remain intact after each flight, allowing whatever crew working on the rocket to replace only the necessary parts and save a bunch of money on said “important” parts. More information on the Falcon 9 is available on its page on the SpaceX website, including the kind of engine, a video of it in flight, and more.

Overall, SpaceX’s technology and aerospace advancements are typically not the subject of controversy, but rather the people involved.

Now, I must say, I personally do not like Elon Musk as a person, but I would be an idiot to ignore all of SpaceX’s accomplishments. I would be even more of an idiot to credit every aspect of the company to Elon Musk himself and not the 12,000 or so employees.

Elon Musk has had his fair share in the lime light, especially since his recently cancelled bid to purchase the social media platform Twitter. Many, like BrandExtract, would argue Musk is a visionary, whose brand pushes the limits of humanity and science. Once again, as someone rather versed in the internet I would not disagree, but there is no denying his popularity among young men and how differently his image varies from generation to generation.

As someone surrounded by media made for and by people born in 2004 (Generation Z), Musk’s brand is quite different. Sure, he’s smart, but he’s also considered cool and hip with the kids despite being 51-years-old. Elon first entered my sights when I was an avid SpaceX livestream fan back in 2018 and once again when he was a guest on Joe Rogan’s podcast The Joe Rogan Experience.

Musk was thrust to the forefront of the internet for a couple of days because of an image that went “viral.” This specific image shocked so many people because here was this supposed super-genius-CEO-podcast-guest participating in an average Joe kind of activity. Or perhaps people were just surprised someone as smart as Elon would smoke “the devil’s lettuce.” There was something so entertaining about a professional being so unprofessional.

I must preface again; I have no problem with marijuana or anyone that does or doesn’t do it. In fact, I am in support of its legalization, but that’s a different story. Anyways, this clip, to many people, made Elon more relatable. Many people pointed to him as the most down-to-Earth CEO in the market. He seemed like a blip in the long line of the insanely rich and smart that could relate and actively participate in things just like “the people.”

Another thing that made Musk so relatable, and arguably landed him in hot water, was his interest in memes. However, that is, again, a story for another time.

The bottom line is Elon Musk made a name for himself that revolved around him being a refreshing spin on the genius stereotype, and I would argue he still markets himself like that today. Scrolling through his social media, there is no shortness of silly memes and professional posts about his SpaceX endeavors.

The bottom line is most of SpaceX’s controversies come from it’s founder, though seldom is the organization’s name dropped during criticism. There are many “people” issues within SpaceX; some more serious than others, but I am evaluating the company as a whole.

Overall, SpaceX is not free of controversy, especially at the hands of its founder, and its technological advancements shouldn’t absolve Musk from any criticism.