Apart from many local sports just kicking off, one thing that has the eyes of many Americans is the start of the NFL season. For western Pennsylvania, the Steelers are off to a 1-1 start, beating the Cincinnati Bengals, and then losing this past Sunday to the New England Patriots with a score of 14-17. 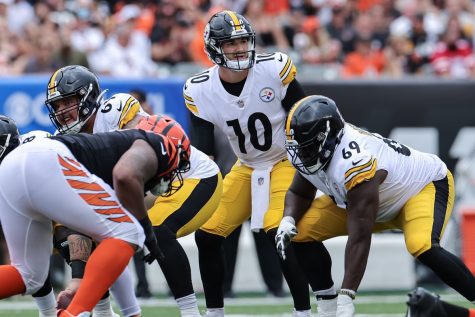 Steelers fans are not happy with the performance of recently picked up quarterback Mitchell Trubisky, as

he’s had a measly 2 touchdown scoring drives combined in both games. He hasn’t shown too many bright spots as some were hoping and has definitely kept the Steelers from pulling away in these close games. He threw one interception during the first quarter of this past game against the Patriots and missed several big time throws towards the end of the game, including a very underthrown, and missed, third down conversion to running back Najee Harris on the Steelers’ last drive of the game.

Right after halftime, “Kenny Pickett” was trending on twitter. Pickett is the Steelers’ recently drafted quarterback from the University of Pittsburgh and seems to be what Steelers fans want on their starting offense. Towards the end of the third quarter, the stands were starting to be filled with chants for Pickett to be put in. He ended up not being put in; although you may see him get some playtime next week in their matchup against the rival Cleveland Browns on Sep. 22.