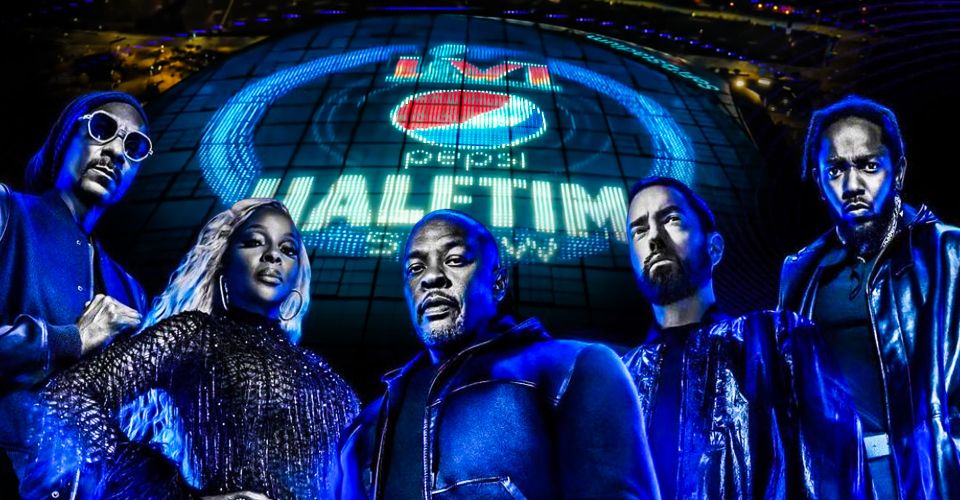 THE CONTROVERSY OF THE 2022 SUPERBOWL HALFTIME SHOW

Even though the Superbowl is one of the biggest sporting events of the year, with people tuning in for the intense football game or the funny commercials, you cannot deny that viewers stay for the iconic musical performances in the halftime show. And this year’s halftime did not disappoint with this year’s lineup, including not one but five old-school rap and R&B legends: Dr.Dre, Snoop Dog, Mary J Blide, Kendrick Lamar, and Eminem.

It was a given that the 15-minute performance would be worth watching. But, as I’ve sat thinking about the Halftime Show, the more I realized, it was filled with things that weren’t supposed to happen.

For starters, even when asked not to, Eminem put his right hand to his head and dropped down on his left knee right after performing his 2002 hit song “Lose Yourself”. All due to respect of former NFL quarterback Colin Kaepernick’s symbolic protest against police brutality and racial discrimination in the U.S.

It was announced that the NFL reps denied the league had any differences with Eminem before his performance. In a statement to The Post, the reps said,” players have been taking a knee since 2016 without sanctions, so musical talent wouldn’t be held to a different standard.”

And if you didn’t know, Snoop Dogg became a member of Rolling 20’s Crips ever since he was a teenager. So the NFL did not want him to show any affiliations towards being in a gang during the Super Bowl. Meaning that Snoop was told not to wear a blue bandanna, flash the Crip gang sign, or even crip walk. But he did all of these things anyway.

If we’re being honest, what’s a Snoop Dog performance without his iconic crip walk?

Rapper Dr. Dre also faced many backlashes saying the lyric, “still not loving police,” in his hit song “Still D.R.E.” The league stated they did not want the performance to be a “divisive culture war moment.”A  source catches Dre saying he felt “disgustingly censored.”

The N.F.L. is notoriously known to be protective of its domain. And mishaps at the halftime show, such as Janet Jackson’s wardrobe malfunction or M.I.A.’s middle finger, ended up causing public outbursts for years. Superbowl Halftime may be one of the last stages in this country where hip-hop still feels like “outsider music.”

“It’s crazy that it took all of this time for us to be recognized,” Dr. Dre said at the game’s official news conference,  emphasizing that the N.F.L. essentially chose to wait until hip-hop had become oldies music. Apart from Kendrick Lamar, all the artists passed their commercial peaks more than a decade ago. Which was the NFL’s  plan to all along to grant it full rein on its biggest stage