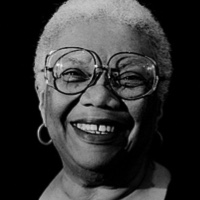 Lucille Clifton was born in 1927 in the state of New York. Her father worked for the New York Steel Mills, where her mother was a launderer, homemaker, and advocate poet. Growing up, she was surrounded by literature, though neither parent was formally educated. She didn’t let this stop her from entering college at the young age of 16.

An actor for a large majority of her early life, she let this shape her stylistic features present in her ever popular poems. Her first collection of poems, Good Times, was awarded the 1969 YW-YMHA poetry center discovery award. From then on, she’s won a plethora of awards.

Growing up in a black community with two active parents evoked a large majority of her poems to be related to her black culture. With her mom being considerably close to her and a poet herself,  another prominent subject of her poems was related to womanhood. All in all, Lucille was a pioneer in the poet community. She took many untouchable subjects head-on, and because of that she’s now considered a revolutionary poet.

Unfortunately, she died in 2010 at 73 of cancer. her legacy will forever live on, shaping the world with her ever powerful words.

Clifton’s poems highlight the strength found through adversity. This was especially prominent in her poems centralized around the civil rights movement.

Notable poems that feature this concept include “malcolm”, “eldridge”, “to bobby seale”, and the last is an untitled poem that begins with “for her hiding place”. These all reference important individuals in the civil rights movement.

Though a lot of her work comments on black empowerment and the struggle African Americans have experienced in fighting for racial equality, she does not wish to be considered a part of the Black Arts Movement. That being said, there is no denying that her poems were by all means revolutionary.