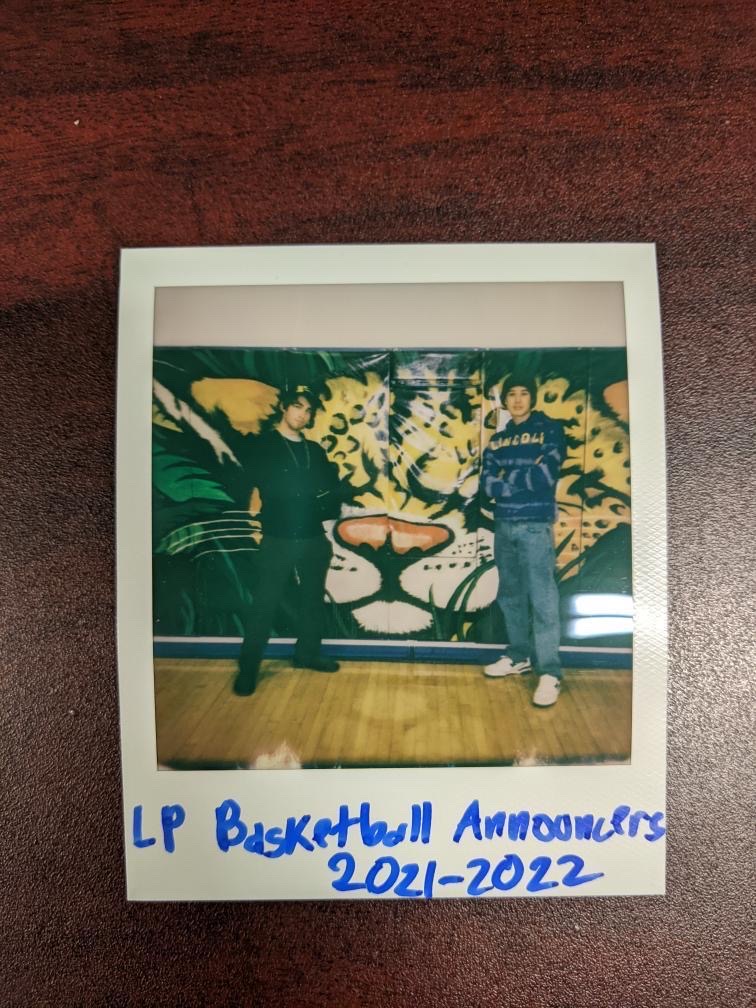 As the boys basketball team finds early success with a record of nine wins and three loses, all eyes are on the all star team. But above the court looms two presences that allow for this team to truly thrive: sportscasters Brandon Jobe and Eli Lishack.

Arguably more important than the coaching staff, each home game Jobe and Lishak fulfill necessary duties. They announce the lineups, announce the national anthem, and announce the 50-50 winners. They are carrying a lot on their backs (notably the Lincoln Park basketball team). But how do these pressures affect their personal lives? Do they feel limited by this newfound celebrity status? I sat down with them and got all of their sportscasting secrets.

How did you get the opportunity to sportscast?

Lishack: Other than God’s good graces, I was actually approached by Coach B… it was probably because I was on “In the Park”, or maybe it was because he just saw something in me. That’s probably what it was, to be honest.

Jobe: One time, Coach B came into my place of work, Bert’s Wooden Indian… He was talking to Eli. He was like “Do you want to announce the game?” And Eli was like “Yeah, sure.” Then Coach B was like “You can get your other partner to do it.” Partner in question? Cameron Tino. But Cameron didn’t want to do it and I was the next best thing.

What are your responsibilities as a sportscaster?

Jobe: Announcing. Knowing the game. Paying attention to the game.

Walk me through a game day routine.

Lishack: We usually get something from the delicious snack shack. The pregame pee is always important… And we chant a little bit of the Lincoln Park alma mater song.

(He proceeded to sing a completely made up song that was most certainly not the alma mater song.)

Jobe: I wake up at six AM. I read the “Book of Basketball” candle lit, by my window. Then I go for an intense morning jog while I listen to the Coach B podcast. Then I go to school. Then I go home, take a nap. Wake up at like 5:30. Go to McDonald’s, get something to grub. Then I go to the game. When I get to the game, I just walk up to my little announcing area.

How many hours a week do you dedicate to sportscasting?

Lishack: I stay up all night really contemplating how the ball will travel down the court and which one of our boys will be the man to do it.

Jobe: Every hour of every waking moment is to sportscasting.

Have you been recognized in public as a sportscaster?

Lishack: Oh all the time.

How has this affected your personal life?

Lishack: My grades have gone down, but teachers are okay with that because they know I’m with the sports team.

Jobe: I have a greater appreciation for athletes and what they go to and team rivalries. I also have never been to a basketball game, so it’s really exciting. It’s just a new experience. It honestly gives me an option to a career field that I never even thought of doing. Which is just like sports announcing, or even just announcing in general.

Do you feel that there is too much pressure on your shoulders?

Lishack: Well the pressure’s immense, that goes without saying. I’m often sweating before the game. Probably more than the actual players on the field. Or the court rather. I think that I’ve gained a lot of respect from the players. I’ve never actually spoken to them, but I can really tell that when they do their little dance going into the spotlight, I was a part of that. I’d do anything to make those guys happy. That sounds weird, let’s not use that.

Jobe: I feel like there is. It’s not pressure like ‘be good’. It’s just pressure to not mess up.

Do you feel that anyone is jealous of you?

Lishack: Yes, I’m sure there are those that are jealous. I guess, I have a message for those people: It may be hard now, but that just sucks.

Jobe: I think Skylar is really jealous of me, that’s why she’s interviewing me.

How is your relationship with the players?

Lishack: Oh great, it’s great. I actually see them in the hallways sometimes. I actually believe that LA Pratt bumped into me once. It was really just moving, deeply moving.

Jobe: There is no relationship… no connection at all.

What qualifies you to get this position?

Lishack: Fantastic that you asked, I actually have quite a bit. When I was 12 or 13, I actually did the YMCA basketball camp. I learned my fundamentals there. Every year up at Colgate Camp, I play “Pig” or “Horse” with my friends. And, a couple of years after my YMCA years, I actually did a basketball camp at the Cranberry Community Center. I also played for Freedom for one year. It was pretty fun, I wasn’t picked for a lot of things, but I got to play.

Jobe: I don’t think anything makes me qualified for this.

To test just how qualified they are, I followed up the questions with a basketball quiz.

What is an alley-oop?

Lishack: Is it like they jump, and they shoot it?

Correct Answer: An offensive play in which one player throws the ball near the basket to a teammate who jumps, catches the ball in mid-air and slam dunks it before touching the ground.

When was basketball made?

Jobe: (I think that Jobe misheard this question and explained how it was made.) (Which was also wrong.)

How many players are on the court?

Correct Answer: Five one each team, ten in total.

How many points is a free throw?

Lishack: Two… Oh, one for a free throw. I thought you meant just from anywhere on the court.

What is a travel?

Lishack: It’s whenever you don’t dribble and just walk with the ball.

Jobe: When somebody takes two or more steps without dribbling the ball.

Correct Answer: A violation of the rules that occurs when a player holding the ball moves one or both their feet illegally.

What is a double dribble?

Lishack: (It was at this point that P.K. Poling walked past us. Mr. Poling gave Lishack the answer and then proceeded to begin quizzing Lishack himself.)

Jobe: I actually don’t know this one.

Correct Answer: An illegal dribble that occurs when a player dribbles with both hands simultaneously or interrupts a dribble by holding the ball briefly in one or both hands.

What is the diameter of a basketball?

How tall is the hoop?

What type of animal is Coach B obsessed with?

How many points is the shot made behind the three point line?

To round this off, I spoke to star player LA Pratt. I asked him if he knew who the sportscasters are and he said “No, I’m not sure.”