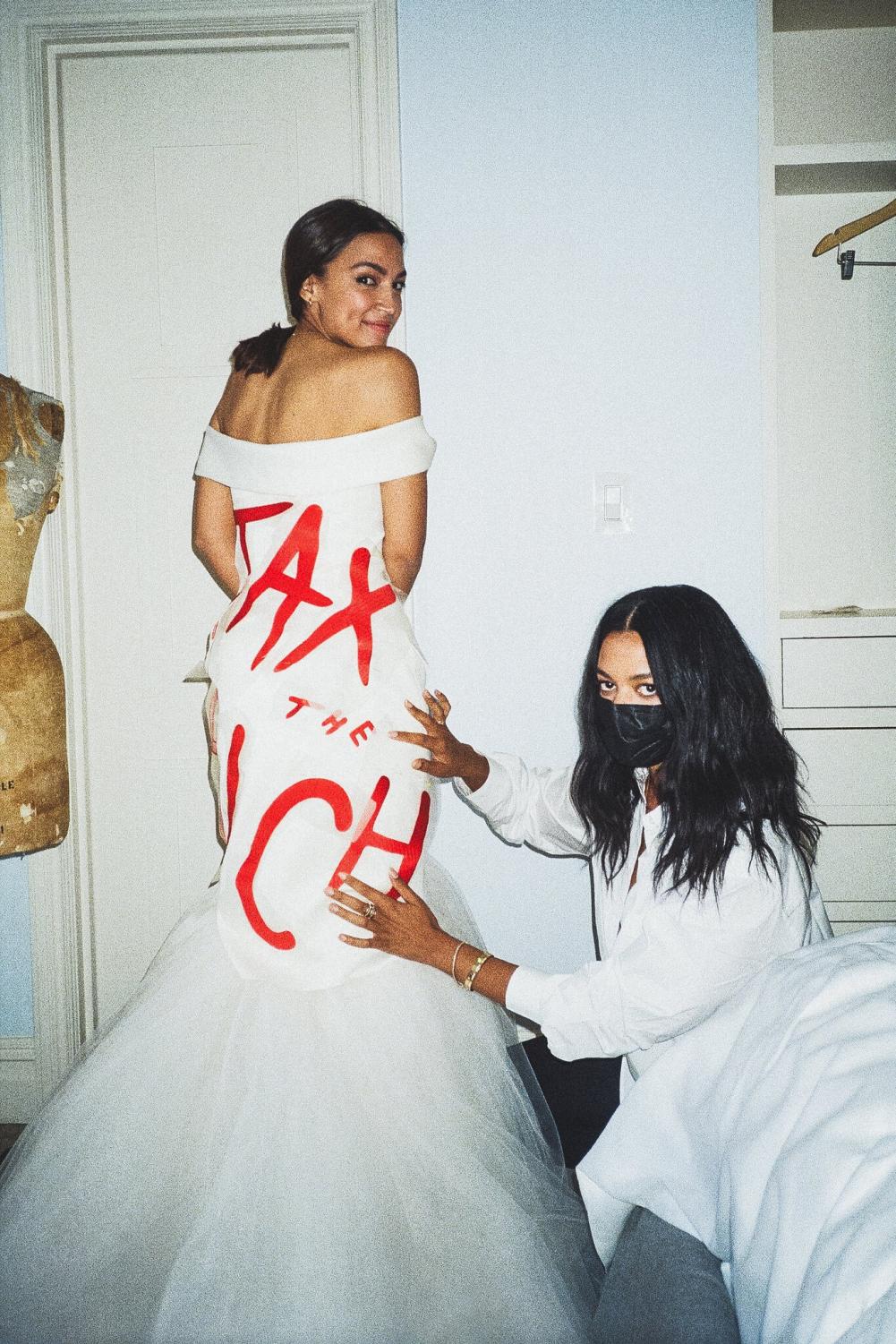 AOC in her “TAX THE RICH” dress. (src: NYTimes)

AOC in her “TAX THE RICH” dress. (src: NYTimes)

OPINION: HYPOCRISY AND INFIGHTING: AOC AT THE MET GALA

A common sentiment among the right is that those who criticize the wealthy cannot be wealthy themselves. Bernie Sanders, despite being reported as one of the least wealthy senators in the United States, owns three houses, which some think makes him hypocritical when he calls for higher taxation on the rich, equal rights, lower economic inequality, and other progressive changes.

For a while socialists, communists, social democrats, and many others have defended him with the idea that criticizing the capitalist system does not mean you are exempt from it. So, while Bernie may have three houses, and some might say he should use that money elsewhere for other causes, that doesn’t mean he can’t be critical of and reform the system that gave him those houses.

However, this idea is starting to gain traction among leftists as well. Recently a popular online content creator, Hasan Piker, was criticized for buying a $2.7 million West Hollywood home for him and his mother despite heavily advocating for the same many things as Bernie and more.

And now, people are coming at politician Alexandria Ocasio-Cortez for her appearance at the Met Gala on the 13th while wearing a beautiful dress sporting the words “TAX THE RICH” on the back.

Instead of focusing on her message, her platform, or any of the things she has done in office, many are mad with that idea of hypocrisy we used to fight against.

Mad that she would go to such a high class event. Mad that she would wear such an expensive dress. Many have slated her as a social climber, a grifter, a traitor to the working class. However, many seem to forget what she is in the first place: a politician and a public figure. Going to the Met Gala in an expensive dress may be a display of wealth and place her among the upper class, but that shouldn’t undermine her message or distract us from what is really important.

We should be glad that someone with such prominence is spreading these ideas and aiding these causes, bringing it to the center stage.

These kinds of ideas, these kinds of disputes, they pull us apart and breed division. Division makes us weak, gives our opponents more power. Rather than focusing on the houses someone owns and the events someone attends we should focus on the real problems. Bernie may own three houses, but Jeff Bezos owns a massive yacht with a second yacht inside of it, and, in 2007 and 2011, paid absolutely nothing in federal income taxes despite being the richest person in the world, who allegedly puts his employees through unlivable wages with inhumane working conditions.

Hasan may have bought an expensive house for him and his mother but Mark Zuckerberg owns 1,300 acres of Hawaiian land, a $59 million set of property on Lake Tahoe, and a $7 million home in Palo Alto, while selling people’s personal data on the world’s biggest social media site.

AOC may have made a political statement via a dress at a fancy event but what about all the backroom highbrow events we never even heard of where the ultra wealthy party and burn money like it’s a paperweight.

Sure, it would be nice if Bernie didn’t have 3 houses, if Hasan spent a little less on his house, if AOC got her message across in a way that wasn’t also a display of wealth. But, we have bigger fish to fry because while we are fighting, the rich get richer and the poor get poorer. While we are fighting, Texas is taking away women’s rights to abortion. While we are fighting, people are trying to take away transgender people’s access to medical care. While we are fighting, our opponents grow stronger and closer. Instead of fighting each other and ourselves, we must come back together and fight against those who actually seek to harm us, to take away all we have fought for, to destroy the planet, and leave us all in ruin.

While all we’ve discussed before was on the inside where high society convened with dresses sporting messages like tax the rich, women’s rights, and “PEG THE PATRIACHRY” from Cara Delevigne, there is another side to the event. As the Met Gala went on uninterrupted inside, a protest formed outside. The protest was for Black Lives Matter against the lack of adequate reforms and budget cuts for police since the mainstream media stopped covering the relevant events after the conclusion of Derek Chauvin’s trial, many also upset over situations like the NYPD which had its budget raised by $230 million. Protesters chanted the name of Mike Rosado, a 24-year-old black man fatally shot by the NYPD this August, further pressing the demands for police reform in honor of those murdered by the police. Many of these protesters, despite remaining peaceful, were detained and arrested by the NYPD on the scene.

Sadly this protest was far less reported on than the Met Gala itself, most outlets covering only the outfits leaving smaller reports to break the news from outlets such as Teen Vogue, Yahoo News, and The Sun. So while AOC and her dress took the spotlight, the people outside fighting for justice and reform were mostly ignored and arrested. But if we want progress we cannot allow these things to go ignored. When millions of people saw the gala itself but much fewer have seen the protest which took place right outside the doors, we have a large problem. Where larger media choses to ignore these issues and move on to the next shiny bell we have to talk about these issues, about these events, and about the people behind them like George Floyd before and Mike Rosado now. If we ignore these issues and let them fall to the side nothing will be done, things will go back to how they have always been, and these problems will not only grow worse for those directly victimized by it but to all of us who will have to live with a more aggressive and unchecked police force than ever before.